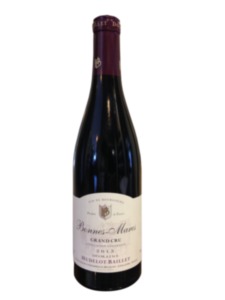 Hudelot-Baillet is relatively a new Domaine by Burgundian standards, having started in 1981. They’re very rarely seen outside France and they’re quite an exciting discovery for us, as we think they’re great quality and value.

Neal Martin: "As usual, a tiny production of Bonnes-Mares, in 2013 just two barrels. The 2013 Bonnes Mares Grand Cru has a glorious bouquet, very pure with just the right amount of opulence: small black cherries, a touch of cassis, violets following later. The palate is very well balanced with fine tannins that have an edginess to them, neatly counterbalancing the opulence of the fruit. There is a superb spicy note near the finish that is long and mineral-driven. Superb, if just a shade off last year's stunning 2012."