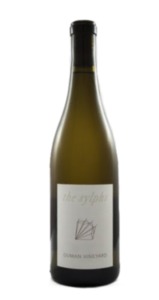 No one describes his wines better than former phylosphy professor and wine maker Abe Schoener himself:” This wine is is so special; a complete triumph. It is composed of 100% CHARDONNAY from John and Faye Guman’s backyard vineyard, in the Coombsville AVA of Napa. The vineyard was originally planted by Nathan Fay (who first planted Cabernet in the Stag’s Leap) on drought-hesitant St. George rootstock, and with cuttings made taken in selection-massale fashion from as many as 20 different old-vine vineyards from all over Northern California. The genetic diversity in the tiny vineyard is tremendous; from plant to plant there is no uniformity in cluster or berry size or shape, and the fruit ripens over at least a week from earliest to latest. All of the fruit has terrific intensity; most of it is very small-berried and thick skinned (this is accentuated by the limited leaf cover offered by the old vines); most is very aromatic, in a classical Wente-clone Muscat-y way.
We have made the wine in an identical fashion since its second vintage: we harvest all of the fruit at
once. We whole cluster press it with great gentleness; usually there is no or only a little foot-treading in the press. We expose the wine to a maximum amount of oxygen from the beginning and do nothing to protect it: no inert gas, no dry ice, no SO2. We press the wine directly to barrel without settling, and if we have enough of them, we use 100 liter barrels that we originally purchased in 2005 and before. We use these barrels of about half the volume of a normal barrel for the fermentation and aging of the wines to quadruple the ratio of the inner surface of the barrel to the volume of the wine. We do this in order to maximize evaporation and general exposure to atmospheric oxygen; a consequence of this practice is that most barrels develop a certain amount of surface yeast each year. The wine always ages without browning or other forms of oxidation. The power of the fruit is so substantial (and somewhat tannic, in spite of the gentle pressing) that the wine breathes and oxygenates, but does not oxidize and become tired. We age in general without topping and without the addition of SO2. In some vintages, the wine matures for 3 years in barrels; in some years, only for a year and half. The 2016 was beautiful and classical from the beginning; very much like the 2014. The wine is not marked by the surface yeast or even the oxygen; and so, when we bottled it in late August 2018, it was still fresh and bright. This is our most classical, balanced, and subtle version of the wine yet.
The wine usually ages without SO2 and is bottled with 0 free and about 25 mg/L total.