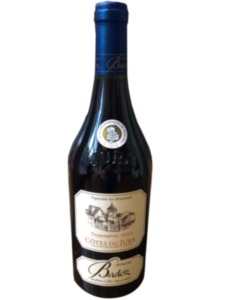 Based in Poligny in the heart of the Jura, Benoit Badoz is the tenth generation of his family to be working the land. In 2003 he took over his father’s 9 hectare domaine having previously worked at Domaine Louis Carillon in Puligny-Montrachet, at Pétrus in Pomerol and in Napa. His wines soon came to critical attention, a 2009 Trousseau becoming the first red wine from the Jura to win "reussite exceptionnelle" in La Revue du Vin de France. Trousseau and Poulsard are the two indigenous grape varieties of the Jura.

Trousseau is the slightly darker and more structured of the two, while still retaining a bright personallity and this is no exception. The flavours are of red and dark summer berries, but with a certain earthiness and a fragrant, subtle floral character. Jancis Robinson describes Trousseau as a cross between the structure of Pinot Noir and the fruit of Cabernet Franc, which pretty much hits the nail on the head.